You know how kings used to have trumpeters heralding their arrival wherever they went? Proxy wants to do that with Bluetooth. The startup lets you instantly unlock office doors and reserve meeting rooms using Bluetooth Low Energy signal. You never even have to pull out your phone or open an app. But Proxy is gearing up to build an entire Bluetooth identity layer for the world that could invisibly hover around its users. That could allow devices around the workplace and beyond to instantly recognize your credentials and preferences to sign you into teleconferences, pay for public transit, or ask the barista for your usual,

Today, Proxy emerges from stealth after piloting its keyless, badgeless office entry tech with 50 companies. It’s raised a $13.6 million Series A round led by Kleiner Perkins to turn your phone into your skeleton key. “The door is a forcing function to solve all the hard problems — everything from safety to reliability to the experience to privacy” says Proxy co-founder and CEO Denis Mars. “If you’re gonna do this, it’s gonna have to work right, and especially if you’re going to do this in the workplace with enterprises where there’s no room to fix it.”

But rather than creepily trying to capitalize on your data, Proxy believes you should own and control it. Each interaction is powered by an encrypted one-time token so you’re not just beaming your unprotected information out into the universe. “I’ve been really worried about how the internet world spills over to the physical world. Cookies are everywhere with no control. What’s the future going to be like? Are we going to be tracked everywhere or is there a better way?” He figured the best path to the destiny he wanted was to build it himself.

Mars and his co-founder Simon Ratner, both Australian, have been best buddies for 10 years. Ratner co-founded a video annotation startup called Omnisio that was acquired by YouTube while Mars co-founded teleconferencing company Bitplay which was bought by Jive Software. Ratner ended up joining Jive where the pair began plotting a new startup. “We asked ourselves what we wanted to do with the next 10 or 20 years of our lives. We both had kids and it changed out perspective. What’s meaningful that’s worth working on for a long time?”

They decided to fix a real problem while also addressing their privacy concerns. As he experimented with Internet Of Things devices, Mars found every fridge and lightbulb wanted you to download an app, set up a profile, enter your password, and then hit a button to make something happen. He became convinced this couldn’t scale and we’d need a hands-free way to tell computers who we are. The idea for Proxy emerged. Mars wanted to know, “Can we create this universal signal that anything can pick up?” 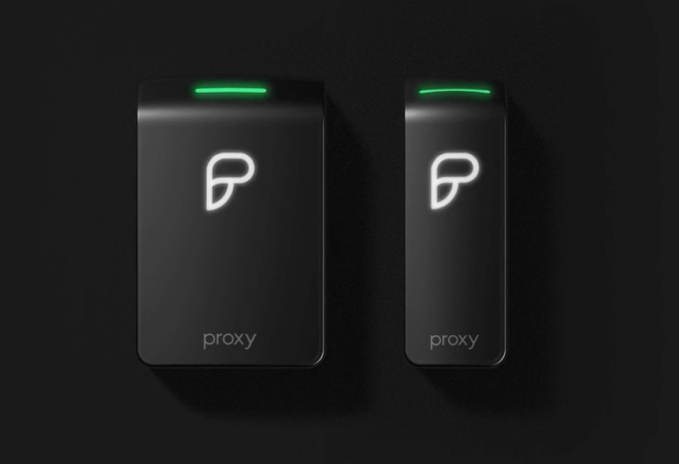 Most offices already have infrastructure for badge-based RFID entry. The problem is that employees often forget their badges, waste time fumbling to scan them, and don’t get additional value from the system elsewhere.

So rather than re-invent the wheel, Proxy integrates with existing access control systems at offices. It just replaces your cards with an app authorized to constantly emit a Bluetooth Low Energy signal with an encrypted identifier of your identity. The signal is picked up by readers that fit onto the existing fixtures. Employees can then just walk up to a door with their phone within about 6 feet of the sensor, and the door pops open. Meanwhile, their bosses can define who can go where using the same software as before, but the user still owns their credentials.

“Data is valuable, but how does the end user benefit? How do we change all that value being stuck with these big tech companies and instead give it to the user?” Mars asks. “We need to make privacy a thing that’s not exploited.”

Mars believes now’s the time for Proxy because phone battery life is finally getting good enough that people aren’t constantly worried about running out of juice. Proxy’s Bluetooth Low Energy signal doesn’t suck up much, and geofencing can wake up the app in case it shuts down while on a long stint away from the office. Proxy has even considered putting inductive charging into its sensors so you could top up until your phone turns back on and you can unlock the door. 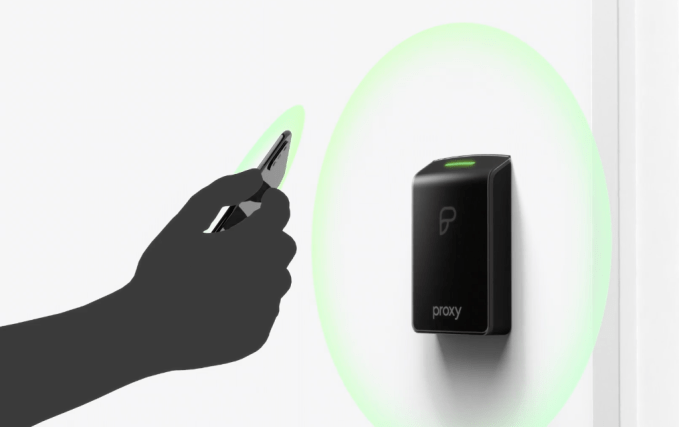 Opening office doors isn’t super exciting, though. What comes next is. Proxy is polishing its features that auto-reserve conference rooms when you walk inside, that sign you into your teleconferencing system when you approach the screen, and and that personalize workstations when you arrive. It’s also working on better office guest check-in to eliminate the annoying iPad sign-in process in the lobby. Next, Mars is eyeing “Your car, your home, all your devices. All these things are going to ask ‘can I sense you and do something useful for you?’”

After demoing at Y Combinator, thousands of companies reached out to Proxy from hotel chains to corporate conglomerates to theme parks. Proxy charges for its hardware plus a monthly subscription fee per reader. Employees are eager to ditch their keycards, so Proxy sees 90% adoption across all its deployments. Customers only churn if something breaks and it hasn’t lost a customer in two years, Mars claims.

The status quo of keycards, competitors like OpenPath, and long-standing incumbents all typically only handle doors, while Proxy wants to build an omni-device identity system. Now Proxy has the cash to challenge them, thanks the to the $13.6 million from Kleiner, Y Combinator, Coatue Management, and strategic investor WeWork. In fact, Proxy now counts WeWork’s headquarters and Dropbox as clients. “With Proxy, we can give our employees, contractors, and visitors a seamless smartphone-enabled access experience they love, while actually bolstering security,” says Christopher Bauer, Dropbox’s Physical Security Systems Architect. 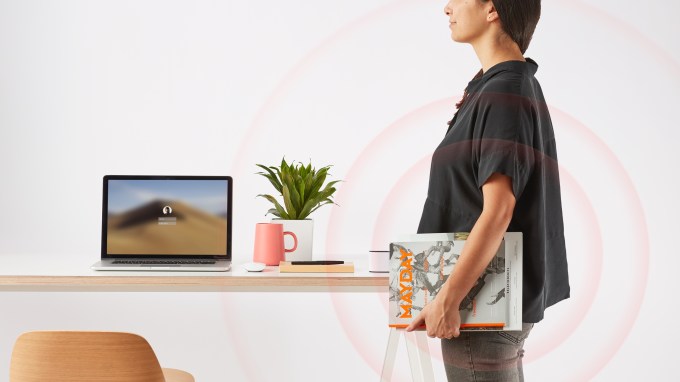 The cash will help answer the question of “How do we turn this into a protocol so we don’t have to build the other side for everyone?” Mars explains. Proxy will build out SDKs that can be integrated into any device, like a smoke detector that could recognize what people are in the vicinity and report that to first responders. Mars thinks hotel rooms that learn your climate, wake up call, and housekeeping preferences would be a no-brainer. Amazon Go-style autonomous retail could also benefit from the tech.

When asked what keeps him up at night, Mars concludes that “the biggest thing that scares me is that this requires us to be the most trustworthy company in the planet. There is no ‘move fast, break things’ here. It’s ‘move fast, do it right, don’t screw it up.’”