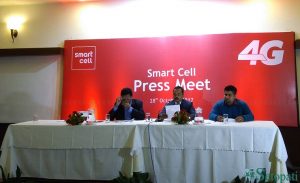 After Ntc and Ncell, Smart cell has also launched 4G here in Nepal. Like with the two big operators, the Smart cell 4G will also be available in two cities, Kathmandu and Pokhara in the first stage. As known, they will extend the 4G coverage to other cities.
Smart Cell 4G is available in those cities from Sunday. Even if the network is there, it will take some time to make 4G run smooth in all parts as they need to test more with the real customers. So, we can say it is the soft launch of Smart cell 4G.

Smart cell claims the fastest 4G than Ntc and Ncell.
Smart cell claims that there are currently not much difference in internet speeds of 3G and 4G with other operators. But with their 4G, they claim they will make customer feel the real difference of internet speed. So, we can say that Smart cell 4G will be the highest speed 4G in Nepal. As they say they have used 10 MHz of bandwidth for 4G LTE, it could be the highest speed 4G. Ntc and Ncell have only used 5 MHz of bandwidth for 4G LTE.

Smart Cell 4G speed
The theoretical maximum speed of Smart Cell 4G is known to be 70 Mbps down-link and 30 Mbps up-link. But the real experience will be lesser than that, which actually depends on the signal received and the no. of subscribers in the same 4G tower. As Smart cell have lower no of subscribers, we can say the experience of smart cell 4G will be better than Ntc and Ncell. We can expect speeds of around 20 Mbps download with Smart cell 4G, which is a really nice speed we must say. When the no of subscribers goes up, the speed of 4G will go down. Still it will be better than the Ntc and Ncell.

After the launch in two cities, they will extend smart cell 4G in more cities. Tell us how do you find Smart Cell 4G speed.