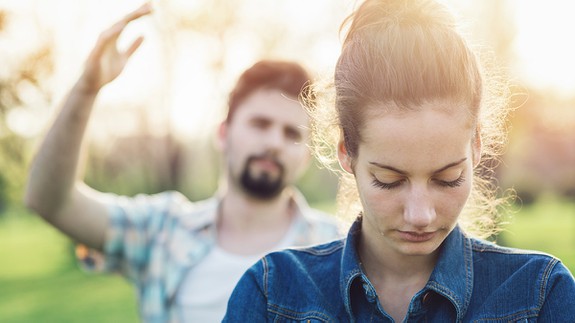 If you’ve ever had to pretend to have a boyfriend or husband to get out of an uncomfortable or threatening situation, then you’ll know that it can be a terrifying and isolating experience.

But, you’re not alone and these responses to Jameela Jamil’s tweets are proof of that.

SEE ALSO: This code word will help you when you feel unsafe on a date

The star of The Good Place tweeted that she was shopping with a friend when a man made advances at her. She told him she had a boyfriend and thanked him, but the situation quickly escalated into one of harassment.

Was out at the shops with my friend. Man ogles me. Man then approaches me to give me his number. I explain I have a boyfriend but thank him for the offer. Man then threatens my career, saying I better remember that I rejected him. And then Shouts at me that I’m low class… 🤷🏽‍♀️

END_OF_DOCUMENT_TOKEN_TO_BE_REPLACED

This piece is part of an ongoing series exploring what it means to be a woman on the internet.

Log off. Make your account private. Block them. These are a few of the strategies women are told to use when faced with online harassment. But they …

END_OF_DOCUMENT_TOKEN_TO_BE_REPLACED

In an unprecedented move, the Royal Family has introduced a set of social media rules in order to create a “safe environment”.
Under the new rules, users posting abusive comments will be blocked or reported to police, and comments in breach of …

END_OF_DOCUMENT_TOKEN_TO_BE_REPLACED

A new survey indicates that social media is an even stinkier cesspool than we previously thought.
The Anti-Defamation League (ADL) released the results of a survey Wednesday that found that over half of all Americans had experienced harassment online…

END_OF_DOCUMENT_TOKEN_TO_BE_REPLACED

Around 37 percent of Americans were subjected to severe hate and harassment online in 2018, according to a new study by the Anti-Defamation League, up from about 18 percent in 2017. And over half of all Americans experienced some form of harassment according to the ADL study. Facebook users bore the brunt of online harassment […]

END_OF_DOCUMENT_TOKEN_TO_BE_REPLACED

Buckle up — this Twitter thread is a wild ride.

A serial plagiarist was caught in a lie — really, many lies — after making up a fake story for an Instagram caption, and it shines a light on the harassment women in tech face.

In a now-deleted post, a software developer Tee Medlin — supposed software developer, since who knows what’s true anymore — claimed that a woman who was pictured but not named was stalking him during a tech conference.

“Has not stopped following me around, asking me questions, and telling me about her life since I got off stage this evening,” read his caption. “Now its social hour and I have a shadow. HELP!”  Read more…

END_OF_DOCUMENT_TOKEN_TO_BE_REPLACED

If you’re a woman with an opinion on Twitter, chances are you’ve been harassed, abused, or even threatened. But, a new major study by Amnesty International has explored the horrifying prevalence of this abuse.

The study — conducted with global artificial intelligence software company Element AI —analysed 228,000 tweets sent to 778 women politicians and journalists in the UK and U.S. in 2017.

SEE ALSO: The most harassed women online share why they’re not logging off

The findings revealed that 1.1 million “abusive or problematic tweets” were sent to the women in the study across the year — one every 30 seconds on average.  Read more…

END_OF_DOCUMENT_TOKEN_TO_BE_REPLACED

If you’re a woman with an opinion on Twitter, chances are you’ve been harassed, abused, or even threatened. But, a new major study by Amnesty International has explored the horrifying prevalence of this abuse.

The study — conducted with global artificial intelligence software company Element AI —analysed 228,000 tweets sent to 778 women politicians and journalists in the UK and U.S. in 2017.

SEE ALSO: The most harassed women online share why they’re not logging off

The findings revealed that 1.1 million “abusive or problematic tweets” were sent to the women in the study across the year — one every 30 seconds on average.  Read more…

END_OF_DOCUMENT_TOKEN_TO_BE_REPLACED

Google employees walked out of offices in London and Dublin on Thursday morning in a protest over harassment and inequality.

It’s expected that thousands of Google staff will participate in a walkout of its 70 offices worldwide over the company’s handling of sexism complaints, abuse of power, pay inequality, and racism in the workplace.

The protest comes just days after a New York Times report alleged that Andy Rubin, the creator of Android, was given a $90 million payout from Google “while keeping silent” about a string of sexual misconduct claims. Per the NYT story, Rubin had multiple relationships with Google employees and “coerced” oral sex from an employee in 2013 — a claim that the company investigated and found credible. In a statement, Rubin denied the allegations, claiming the NYT story contained “numerous inaccuracies” and he states he “never coerced a woman to have sex in a hotel room.”  Read more… END_OF_DOCUMENT_TOKEN_TO_BE_REPLACED

Now that the man suspected of sending at least a dozen bombs to Democratic figures across the country has been arrested, we’re getting a clearer picture of who he is, and his social media presence. A woman on Twitter is claiming that an account assoc…

END_OF_DOCUMENT_TOKEN_TO_BE_REPLACED

A British billionaire tycoon flexed the might of his £2 billion wealth by attempting to block a national newspaper from publishing allegations of “sexual harassment and racial abuse of staff.”

Philip Green — the owner of Topshop — spent £500,000 on legal fees to obtain an interim injunction from the Court of Appeal preventing The Telegraph from naming him. Just 50 hours after the ruling, parliament intervened. It took 28 seconds for Lord Hain — a peer in the House of Lords — to name the alleged man at the centre of the scandal. Green has “categorically and wholly” denied the allegations.

This story raised questions about the weaponisation of NDAs and injunctions in the #MeToo movement — and the efficacy of such legal tools in the internet and social media age.  Read more…